Fishing Lines: How to Chose the Best Line

Never in history have we had the luxury of so many choices in fishing lines. Not only are they made from various materials that offer special advantages, but the quality of today’s products is better than ever.

In their ads, manufacturers boast that they’re thinner and stronger and tougher, a combination that used to be impossible. In many cases, these claims are true. Moreover, in response to angler demands, lines have become more manageable and easier to tie.

Monofilament lines were a huge breakthrough when they hit the U.S. market in the late 1940s. They were flexible, strong, and translucent, giving them advantages over Dacron lines, not to mention those of silk and horsehair with which anglers of the 17th century had to contend. Nylon’s stiffness made it very coily, however. In 1959, DuPont brought us into the modern era with Stren, which was thinner and more flexible, yet equally strong. It made casting far easier. Over time, many improvements have been made in the chemical formulation of mono lines. 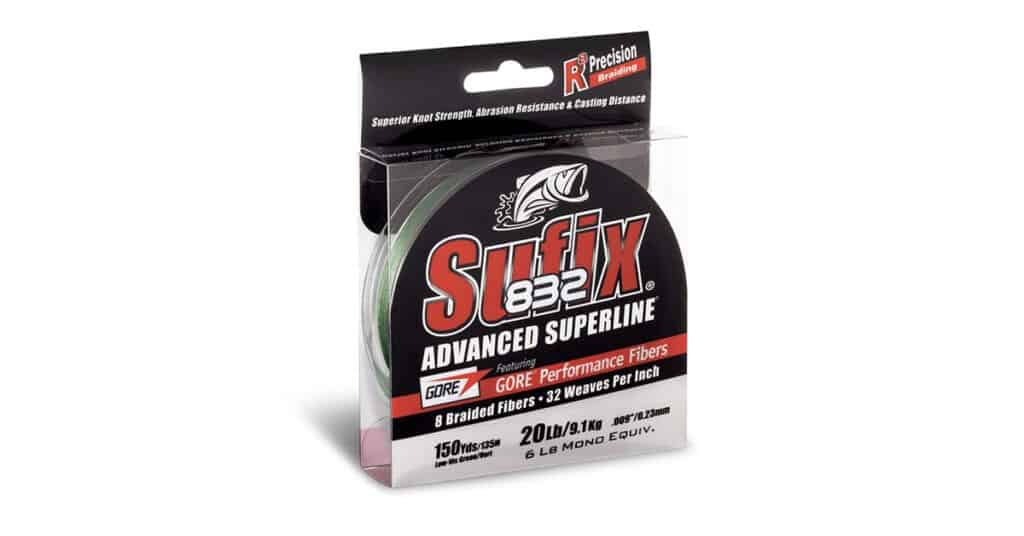 Anglers didn’t know what they were missing until so-called “superlines” appeared around 1990. First on the U.S market was SpiderWire, made of braided Spectra fiber. The hair-thin fibers provided uncanny strength, so braids testing 10 pounds were of a diameter equivalent to 2- or 4-pound-test mono. Braids of Dyneema hit the market a little later, and new braiding techniques continue to improve these lines, making them thinner, stronger, and more manageable, as well as increasingly abrasion-resistant. Braided line is 2 to 3 times as expensive as mono per yard, but remains popular for its longevity as well as its strength and low diameter. A spool may last an angler several years of regular use before requiring a change. And that can be accomplished by reversing the line on the spool, placing the used line in the interior of the spool, so it serves as baking for the unused line.

Fluorocarbon, invented by Japanese scientists around 1970, entered the line scene in the saltwater realm, but didn’t become a player in freshwater fishing for nearly 20 years. Its attributes include low refractive index, closer to that of water itself, so theoretically harder to see under water; lower stretch compared to most monofilaments; ability to withstand UV light from the sun; and increased abrasion-resistance. But it’s stiffer than monos and braided lines and also substantially more costly per yard for top-end products. Each of the three major line types has advantages and disadvantages in various situations.

What to Use When

Given the variety of species we target, there are uses for all these line types, as well as  leaders of a different material. To provide some insights on the best lines to use for what, we questioned several staff members at Lindner Media, as well as some top pros and guides for their input. It turns out Al Lindner is still a fan of mono, occasionally with a fluorocarbon leader. “I use 8-pound Sufix 8-pound mono for fishing walleyes with reaction baits like the VMC Bucktail Jig or softbaits on leadheads.” For fishing a Jigging Rap in open water, a technique he’s made famous for walleyes and bass, he adds a fluorocarbon leader. “The fluorocarbon is all about the super clear waters we now have in lakes infested with zebra mussels,” he says. “The Jigging Rap fishes better with a mono main line, which gives it a ‘rubber-band’ effect due to its stretchiness. You’ll get more bites and land way more fish with mono. And there’s no problem hooking walleyes in deep water, down to 30 feet or so.”

Veteran Minnesota guide Tom Neustrom spools straight mono for his walleye jigging. “During the early season, a jig and minnow generally is the top option on lakes of all types, and in many conditions,” Neustrom notes. “At this time of year, you find walleyes between the shoreline and the first major breakline to deeper water. Look for areas where the slope isn’t too steep. Windblown areas are key and the water tends to be a little darker, so I don’t worry about walleyes seeing my line. Believe me, we catch more than our share!”

Catfish anglers also have been long-time fans of mono for its sturdiness, smooth casting, longevity, and lower cost. Monos testing above 30-pound-test have a large diameter, which inherently increases abrasion-resistance, always a concern in cover-laden holes where cats often are found. Mono also slides across sunken wood better than braided lines, which can cut into limbs, binding the line. “When fishing for medium-size channel cats, 12-pound mono is ideal,” James Lindner notes. “On waters where they get huge, like they Red River of the North, I upsize to 25- or even 30-pound test.”

James and many bass pros also use mono for topwater lures, as it generally floats after a cast, though it may gradually sink. Its moderate stretch also helps bass eat a lure entirely before the angler sets the hook. In some situations, anglers prefer braid, such as when we can cast lures as far as possible to reach schooling fish or to cast a fast-moving lure far to cover a lot of water. The stretchiness of mono can make setting the hook a challenge when strikes occur at such distance. Stretchless braid allows a quick set, but care must be taken not to rip treble hooks out during the battle. Moreover, straight braid often catches the front treble of topwaters, ruining the cast and requiring some delicate unsnarling or even retieing, as the microfibers become separated by the hook point. The answer is a mono leader of several feet, as that line won’t catch hooks. It may also provide a bit of shock absorption in combination with braid, helping keep bass pinned. 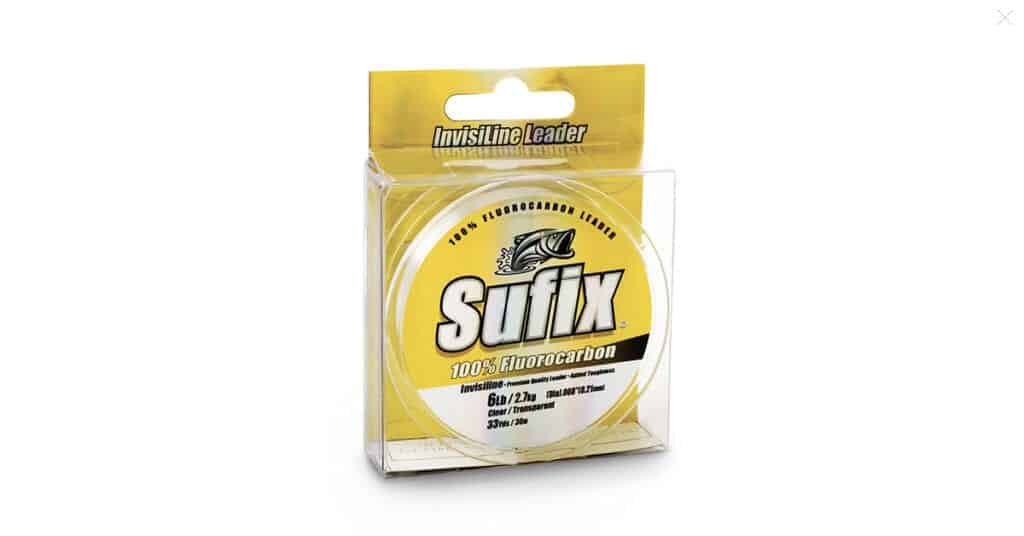 We also know many top anglers who use mono for bass fishing with finesse rigs like drop-shots and Ned rigs, where feel isn’t critical and slack causes line management problems when using fluorocarbon, due to its oily nature. In water with less that 4 feet of visibility, fluorocarbon provides no advantages in terms of fooling fish. For those rigs, though, many other experts opt for thin braided main line with a fluorocarbon leader of 2 feet or more, especially when fishing water deeper than 20 or 25 feet.

Braided lines get the nod from bass anglers whenever the bite is in thick vegetation. That’s because its relatively thin diameter slices through lily pad stalks and the toughest weeds like hydrilla and milfoil. Thus frogging and flipping grass mats are the realm of the 50- to 65-pound braid. Setting the hook and getting the fish’s head turned quickly are key to landing success in those scenarios.

For flipping wood, however, flippin’ legends like Denny Brauer use 20- to 30-pound fluorocarbon. “Braided line can cut into sunken logs and bind, preventing you from feeling bites or delaying the hookset,” Brauer notes. “Thicker fluorocarbon slides smoothly through woodcover, telegraphs bites readily and sets fast.”

But braid has other positives as well. Al Lindner has become an advocate for spooling 10- to 12-pound Sufix 832 braided line on his jerkbait rod. “I rely on spinning tackle for fishing jerkbaits, as they can increase casting difference and spinning rods make it easier to work the lure,” he says. “I add a 6- to 7-foot leader of 8-pound-test fluorocarbon in all situations. It prevents any potential tangling problems and is a positive in clear lakes.”

Braid has an important role for walleye anglers, too. Brian Bashore of South Dakota is a pro angler and guide, among other outdoor-related roles. He fishes the big Missouri River reservoirs where current always plays a role. “You find the warmest water up toward the dam,” Bashore says. ”The rocky shorelines and structures there provide spawning habitat, and the flow attracts tons of baitfish. They’re natural magnets for walleyes.

On smaller river systems, the tailrace itself is the hotspot, but on big waters, look for the best bite downstream a mile or two. Present jigs at the same speed as the current by keeping the boat pointing upstream as you slowly drift downstream. Use the trolling motor to keep yourself in line and slow the drift. I rely my Humminbird MEGA Imaging transducer to locate key structures to drop on. I spool 8-pound Nanofil or 10-pound Fireline on my jigging outfits, with an 18- to 24-inch leader of fluoro or mono. Thin braids slice through the current and keep your lure down where you want it.” For Rippin’ Raps, famed Minnesota guide Tony Roach uses a main line of 6 – to 10-pound braid with a 10- to 12-pound fluorocarbon leader. “Braid casts so well and you get solid hooksets no matter how far you cast,” he adds.

Multispecies expert Jeremy Smith favors a braided main line when jigging for lake trout. “When I’m targeting a population with mainly mid-size fish (4 to 15 pounds or so),” he says, “a 12- to 14-pound fluorocarbon leader is fine, though I upsize to 20- to 30-pound fluorocarbon when I’m after the giants of the Far North. If pike are roaming with them, I add a short leader off 30-pound single-strand titanium wire.” He spends a lot of time in pursuit of muskies and relies on braided line with a variety of short leaders to prevent bite-offs. “An 8-inch stainless steel wire leader works for most muskie baits,” he adds. “With spinners and prop baits, I add a #2 stainless heavy-duty ball bearing swivel to prevent line-twist. When fishing big live baits like 14-inch suckers, I use a 3- to 4-foot section of 30-pound single-strand titanium with a barrel swivel connected to the main line, and a #3 Stay-Loc Snap to the terminal end. I add shrink-wrap tubing to both ends of the titanium to avoid betting poked by the tag end. Then there’s a short bridle of 69-pound single-strand stainless and the hook.

Al gives the nod to fluorocarbon for jig fishing bass. “I use bait casting tackle and flouro casts and pitches jigs easily,” he says. “Its density means it sinks, to you have a direct line to the lure, and it’s a little more abrasion-resistance than other line types, and less visible to fish. Moreover, it stretches less than mono, so you can feel the lure a little better and detect bites more easily. In rather open areas, I spool 12-pound, going up to 20-pound around thick wood and weedgrowth.” When casting tubes and grubs for smallmouths, Jeremy also uses fluorocarbon, generally 8- or 10-pound in open water. With zebra mussels in most top smallie waters, he likes the visual advantage of fluoro.

For trolling for walleyes or salmon and steelhead, there’s an additional line to add to your arsenal—leadcore. If you aren’t familiar, it’s a Dacron braid with a thin section of lead inside, designed to sink the presentation without additional weighting. Spools of leadcore alter color every 10 yards, so you can easily keep track of depth. The rule of thumb is that a lure runs 5 to 6 feet deeper for every color put out, assuming a speed around 2 mph. Brian Bashore makes use of leadcore when trolling for walleyes on Missouri River reservoirs, where fish often feed in deep offshore areas during summer and fall. And leadcore is one of the deadliest weapons for walleye anglers on Lake Erie and Saginaw Bay. Salmon trollers on the Great Lakes rely on it as well, especially those who fish in smaller boats without downriggers. 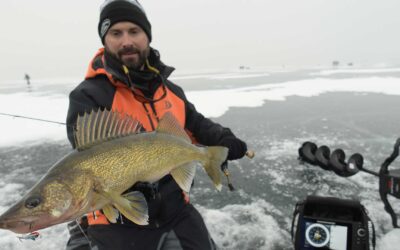 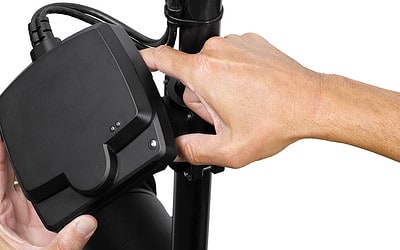 MEGA Live Imaging provides the most impressive live sonar on the water, allowing you to watch fish and structure in real-time, powered by the unmatched detail of MEGA Imaging. 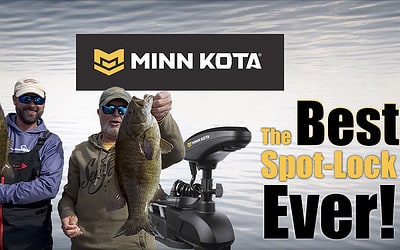 Al Lindner and Jeremy Smith are fishing in the wind for smallmouth bass.